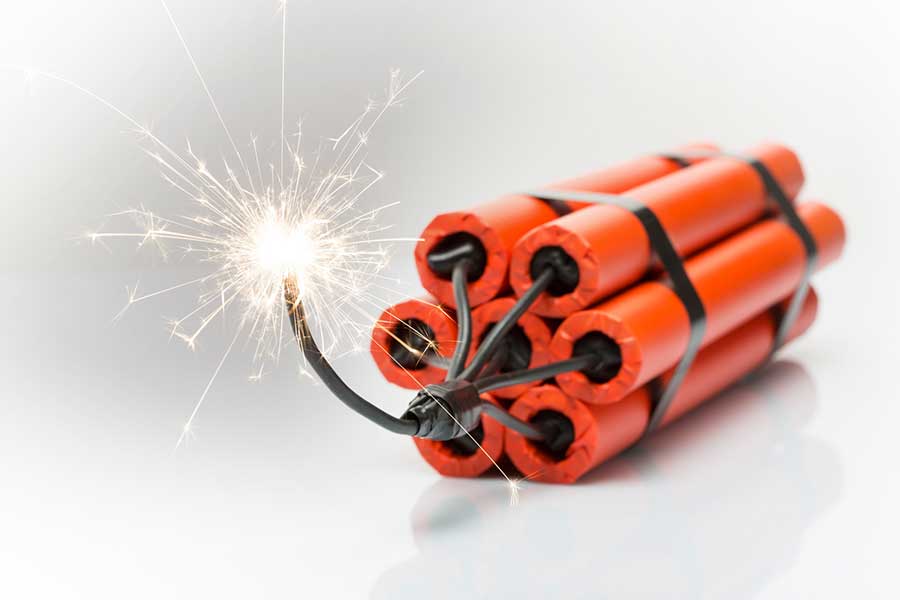 The great inventors throughout time are inevitably remembered for their masterpieces — the inventions and innovations which have helped shape mankind’s history. Which is very fortunate for the following master inventors, who also came up with a few stinkers along the way. Here we take a look at the truly terrible inventions which came from the brilliant minds of great inventors.

With more than 2,000 patents to his name, the prolific inventor Edison was bound to come up with a few duds along the way, but the Edison Doll was a terrifying failure. Not content with inventing the lightbulb and the telephone, Edison decided to create a talking doll for children.

The doll was reliant on a phonograph (another top invention by Edison) being played at the correct speed, lending the inanimate dear a voice. Unfortunately, the phonograph was still difficult for a child to operate with any degree of accuracy, leading to a terrifying fast-paced squeal or slow, devilish drawl.

The final nail in the coffin was the quality of recording available at the time, which was still quite crude. So even when the phonograph was operated at the correct speed, the doll still sounded quite monstrous.

Another entry from Edison, and he’s perhaps a bit unlucky with this one – with concrete widely used in modern architecture. However, in 1917 he built 11 concrete homes, complete with concrete furniture and concrete pianos, but did not manage to sell a single one. His thinking was that concrete houses could be built on the cheap, and help solve housing crises.

An absolute failure of a venture, Edison never visited the idea again – the practical benefits of concrete houses could not overcome public’s horror at the thought of living in a concrete block, and sitting on concrete furniture.

Despite this, over the years, other people picked up some of the principles. Writer, Judy Wearing, encased her own piano in concrete and reported that the sound quality was actually improved in her account, Edison’s Concrete Piano.

Seemingly an expert in a limitless number of disciplines; Da Vinci’s contribution to the sciences, arts and literature cannot be underestimated, and he is often regard as one of history’s few Universal Geniuses. Musical instruments, hydraulic pumps and steam cannons were amongst the inventions born from Da Vinci’s vast brain. As were the dreadful water walking shoes.

Designed to help warriors invade enemy ships and cross moats, the shoes were essentially big inflatable floats attached to the wearer’s feet. Following Da Vinci’s designs, modern inventors created the shoes and found it near impossible to balance upon them. And even when balance was achieved, walking was entirely impossible.

In the late 1970s and early 1980s, Clive Sinclair was one of the world’s biggest names in consumer electronics, inventing the world’s pocket calculator and the UK’s first mass-market home computer. Sadly, his mini television, released in 1977, was not such a success, plagued by fiddly controls, a tiny screen and unreliable reception.

Furthermore, the mini television from Sinclair was not quite small enough to fit in most pockets, so folks were lumped with carrying a mid-sized black brick emitting the fuzz of static.

In the early 90s, Nintendo was at the height of its power, with the NES, SNES and Game Boy systems all proving to be incredible hits. At the heart of this success was Gunpei Yokoi, the video game designer responsible for many of the company’s biggest hit games and consoles. Sadly, he went a little bit too far when he created the Virtual Boy – advertised as the world’s first portable games console capable of true 3D graphics.

The major (and very predictable) issue most gamers (and concerned parents) had with the Virtual Boy was the fact it required players to sit up against the screen to receive the 3D quality graphics. Concerns were raised about the effect this could have on the eyes of players, and the comfort of essentially being strapped into the games console.

Virtual Boy was overwhelmingly panned upon release with critics highlighting the discomfort of playing the games, the terrible graphics and the poor line-up of games. It marked a sad conclusion to Yokoi’s tenure at Nintendo, handing his notice in to the company not long after the disastrous launch of the console.

Although no one can doubt the success of dynamite – its inventor, Alfred Nobel, came to loathe the invention. Designed for use in mining, dynamite’s deadly design leant itself perfectly to more sinister means – something which pained Nobel greatly.

So impactful was Dynamite upon Nobel, he donated 95% of his fortune to creating his eponymous awards to celebrate peace and positive scientific breakthroughs.

The father of the telephone’s father was a famed elocutionist, so Alexander Graham Bell grew up around the theory of sound and speech. In fact, his father had developed a method to help encourage correct pronunciation in children.

At the age of 20, Bell decided to expand upon his father’s works by teaching his adopted dog to speak. A rescued stray, Trouve, was to be the subject of Bell’s experiments, and was able to articulate the phrase ‘How are you, Grandmama?’ by the end of the training.

Sadly, the adopted pooch wasn’t concerned about the old lass’ wellbeing, to utter this sentiment, Trouve relied upon his master to shape his muzzle to perform the required syllables.

The incredible mind of Nikola Tesla innovated an amazing array of concepts and technologies far ahead of his lifetime, with x-rays, robotics and wireless energy transfer all coming from his brain. Some of his innovations were slightly unsettling though, such as the Earthquake Machine, designed to replicate the effects of a full earthquake.

As a founding father of the USA, and the inventor of the lightning rod and bifocals; Benjamin Franklin’s place in the history books is assured. But in almost Beano-esque fashion, he was also responsible for the crotch-less bee suit.

A keen beekeeper, Franklin was ever-conscious of their stings so designed his own bee-suit. However, he was also overly concerned about the potential to need to urinate during his time with his bees – something which, as a busy man, he had little time to do. And so was born the crotch-less bee suit, perfect for urinating during bee-tending duties, rubbish for protecting the nether regions.

The king of vacuum cleaners, public toilet hand dryers and now hairdryers; James Dyson’s first invention was a modified version of a wheelbarrow, the Ballbarrow. Unsurprisingly the Ballbarrow followed the same design as its predecessor, simply replacing the wheel with a ball. Although it never took off, the Ballbarrow was featured on the BBC show, Tomorrow’s World.

We’ll let Dyson off though, he was only 23 when he came up with the Ballbarrow. And he has gone on to use a manoeuvrable ball in his other inventions, including his famous range of vacuum cleaners.

Based in the UK, InterFocus are a leading supplier and furnisher of commercial laboratories. For more information about InterFocus’ products, visit the homepage or call us today on 01223 894833.

The Worlds Most Extreme Science Laboratories

A Guide to Getting Funding in Science

A great idea, no matter how simple, needs nurturing and moulding before realising its potential for innovation. Luckily, there’s... read more

How to Ensure Your Laboratory is Equality Act Compliant

Replacing the Disability Discrimination Act seven years ago, the Equality Act 2010 seeks to protect those in the workplace... read more

How to Run Lab Meetings with Flexible Working

When you’re running a laboratory, checking in with peers through regular in-person meetings is key to keeping up with... read more

An uneven floor in a lab is certainly a cause for concern. Where transporting hazardous chemicals and equipment around... read more