Where Does the UK’s Science Funding Go

Home » Blog » Where Does the UK’s Science Funding Go

Where Does the UK’s Science Funding Go 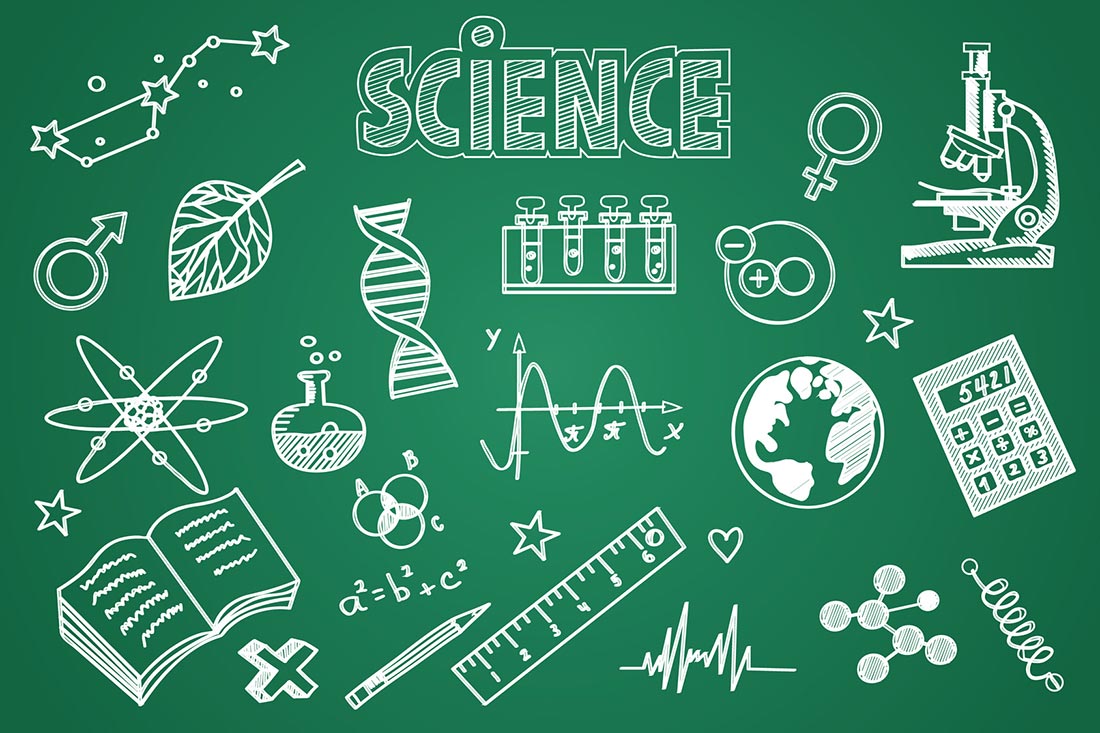 Where Does the UK’s Science Funding Go?

According to the SCImago Journal & Country Rank, the United Kingdom is the world’s third most influential nation in terms of scientific research and output. Trailing behind only the far larger nations of United States and China, the UK’s contribution to the science world is hugely significant, helping to progress important areas of study and understanding.

Both Governmental and private funding contribute towards the UK’s scientific output – with institutes all around the country battling for all-important cash injections. The allocation of funding is a hot topic for almost everybody involved in the sciences in any way; with so many worthy recipients, the decision regarding monetary distribution is controversial and convoluted in equal measure.

Accusations of favouritism in science funding have been thrown around for years, and are unlikely to fade away. Many believe their projects or institutes are routinely overlooked when bidding for funding because they are working on unglamorous projects or belong to less-romanticised schools/research teams.

In a bid to understand where the UK’s funding for the sciences currently goes, we are exploring the regions, disciplines and projects which receive the highest levels of funding.

Government Contributions
The Government outlined a commitment to scientific research by pledging £1.1bn per year to the UK’s scientific infrastructure until 2021. This was outlined in the Allocation of Science and Research Funding 2015/16 guide. Published in 2014, this guide helped to alleviate the concern that the sciences would be amongst the most affected areas when anticipated public spending cuts were put into action.

The funding will come from the Department for Business, Innovation and Skills (BIS) – whose total investment in the sciences reached £5.8bn in cash terms by the end of the Financial Year 2015/16. Since its inception in 2009, the BIS has been dedicated to encouraging economic growth.

With one eye on maintaining the UK’s position as a world leading force in a range of scientific fields and the other on keeping the purse strings tight; the Government has revealed plans to target investments which reap the largest rewards. The above guide states:

“This continuing investment in our world-class research base will help us achieve our ambition to make the UK the best place in the world to do science and research.

“But with this continued Government commitment to our excellent UK research base, comes a challenge to ensure we gain maximum benefit from this investment. This means continuing to build on efficiencies, increasing collaboration to develop creative solutions to shared goals, and doing more to leverage business and charity funding. These are themes which run throughout these allocations.”

However, the guide does suggest there is a little room for scientific indulgence:

“We are also providing funding for our outstanding researchers to pursue curiosity driven research. We continue to fund the UK’s National Academies for this purpose. In addition, for the first time in 2015/16 we will be providing a funding allocation to the Academy of Medical Science, alongside its sister Academies.”

The Allocations
The Government allocations to the sciences can be split into five distinct groups:

These allocations were divided as such: 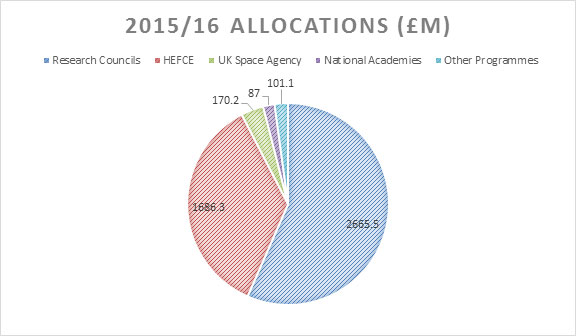 Research Council Allocations
As demonstrated, research councils are receiving the lion’s share of the 2015/16 allocations – split across 10 different councils.

These allocations were divided as such: 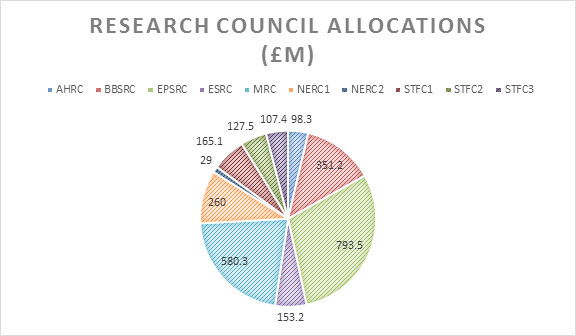 National Academies Allocations
The four national academies benefitting from the Government investment are:

You might have noticed these institutions were all involved in the decision-making progress. Their allocations are divided as follows: 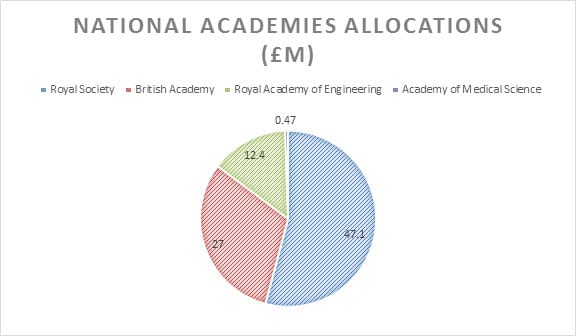 Other Programmes and Miscellanea
A few institutions and programmes which sit outside of the stated groups have also received funding. These are:

Their allocations are divided as follows: 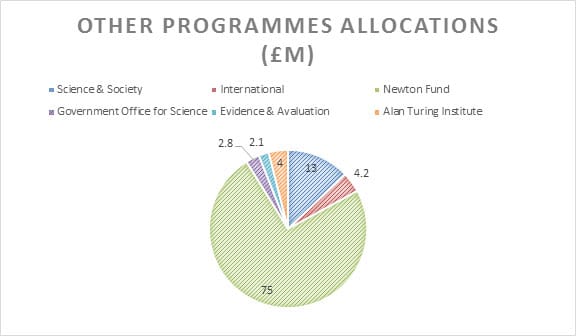 Regional Research Investment
The Research Councils UK (RCUK) is the body responsible for investing public money in research projects. Intending to help advance knowledge and generate ideas to encourage a productive economy, health society and a more sustainable world; the research council allocates millions of pounds every year to research teams throughout the UK.

Here is a regional breakdown of the research funding allocation for every financial year between 2005 and 2015.

Although these figures do not represent the total funding received from government and independent sources in each region, they provide a good indication of the areas which receive the highest levels of funding.

A brighter point however, there is evidence that the level of funding has increased almost year-on-year in every region, demonstrating that funding for research is at least growing in line with inflation, if not ahead of inflation. With a severe global recession hitting during this period, it is a relief to see that public spending of research projects did not suffer significantly.

This provides encouragement for the research laboratories and teams seeking funding to start or continue vital projects. Hopefully this ongoing dedication to the sciences can help the UK retain its position as the world’s third largest contributor to the field.

InterFocus are leading UK suppliers of research laboratories, equipment and lab furnishing. For more information about how InterFocus can help you and your research team, visit the homepage or call the dedicated team on 01223 894833.